That sounds like an oxymoron, but more precisely describes the way we get and use bioidentical hormones.

Please don’t take offense, especially if you’re a provider who subscribes to my emails and YouTube videos. I may say some things in this post and video that are the exact opposite of what you’ve believed.

Feel free to disagree with me. Your comments and feedback encourage me. I’ll try and see things from your perspective.

Our friend, Dave, pastored a church, writes books and blogs, studied theology, and taught New Testament at Calvin University in Grand Rapids, MI. A man of words, he wrote and taught in Greek, Hebrew, Aramaic, German, and of course, English.

He used to say, “Words don’t have meanings . . . they have uses.” What he meant was that it’s the use of words that defines them.

Merriam-Webster defines “natural” as “existing in or produced by nature: not artificial.”

The etymology website, Etymonline says that “nature” was first used in the 14th century in the context of . . . “not artificially cultivated or created, existing in nature”

Etymonline also shows the original use of the word “synthetic” . . . “From 1874 in reference to products or materials made artificially by chemical synthesis; hence ‘artificial.’”

Although the word bioidentical appears in no etymology books or sites, it comes from the word “identical,” which, according to etymonline, “Replaced Middle English idemptical (late 15c.), from Medieval Latin idemptitas “identity,” from Latin idem.”

Bioidentical first showed up in PubMed, an online database of scientific and medical studies, around 2001. CR Walker wrote the first use of “bioidentical” (in the context of hormones) in an article in Advanced Nurse Practitioner entitled, Bioidentical hormone replacement therapy. A natural option for perimenopause and beyond.

Bioidentical hormones describes hormones that are exactly the same in chemical structure as hormones produced by the human body.

Synthetic vs. Bioidentical: A False Dichotomy

Unfortunately, many of us in the hormone optimization world have created a false dichotomy. We speak and write about hormones in a way that suggests there are only 2 options:

In my research on hormones and hormone optimization, I find almost no one who is using the terms natural, synthetic, and bioidentical precisely. I hear hundreds or even thousands of patients and providers who use these terms in ways that only add to the confusion.

A hormone cannot, by definition, be both natural and synthetic at the same time. It comes either from nature (natural) or is man-made through a chemical synthesis process.

Premarin® Is Not Synthetic

Premarin®, also called conjugated equine estrogens, comes from the urine of pregnant mares. You may know that Premarin® came on the menopause scene in 1943 as a treatment for hot flashes and other menopause symptoms. Prescriptions for Premarin®, one of the most-prescribed medications in 2001, dropped dramatically after the results of the Women’s Health Initiative seemed to suggest that the drug increased breast cancer risk.

Since the WHI, doctors, patients, health educators, and others have often called Premarin®  a synthetic hormone.

If we look back at the uses of the words natural and synthetic, we can easily recognize that Premarin® doesn’t fit the word synthetic.

The ingredients in Premarin®  do not come from a chemical synthesis process, they come from horses. Premarin® is produced by natural means, collecting [natural] urine from a [natural] horse. It’s not at all synthetic.

Several years ago, I cut a Premarin® tablet in half. I took the 2 halves of the tablet and smelled them. They reeked very strongly of horse urine.

If horse urine is not natural, I don’t know what is. I suspect that’s why Pfizer®, the manufacturer, coats Premarin® tablets with sugar, to mask the natural (but awful) scent.

ALL Bioidentical Hormones ARE Synthetic

Over the past 20 years or so, healthcare providers have started referring to bioidentical hormones – hormones given to humans to replace hormones their bodies need, but don’t make any more :

Bioidentical hormones describes the fact that estradiol, testosterone, progesterone, and the others on the list have chemical structures that are exactly the same as their hormone counterparts produced by the human body.

What concerns me is the misunderstanding of where, specifically, these hormones come from.

Every one of these bioidentical hormones comes from a chemical synthesis process.

They are all synthetic. And they are all bioidentical at the same time.

That’s where the false dichotomy comes in.

Not All Synthetic Hormones Are Bioidentical

The pharmaceutical industry synthesizes a long list of hormones given for menopause and other hormone-related issues. But that doesn’t mean they contain hormones that are identical to human hormones. 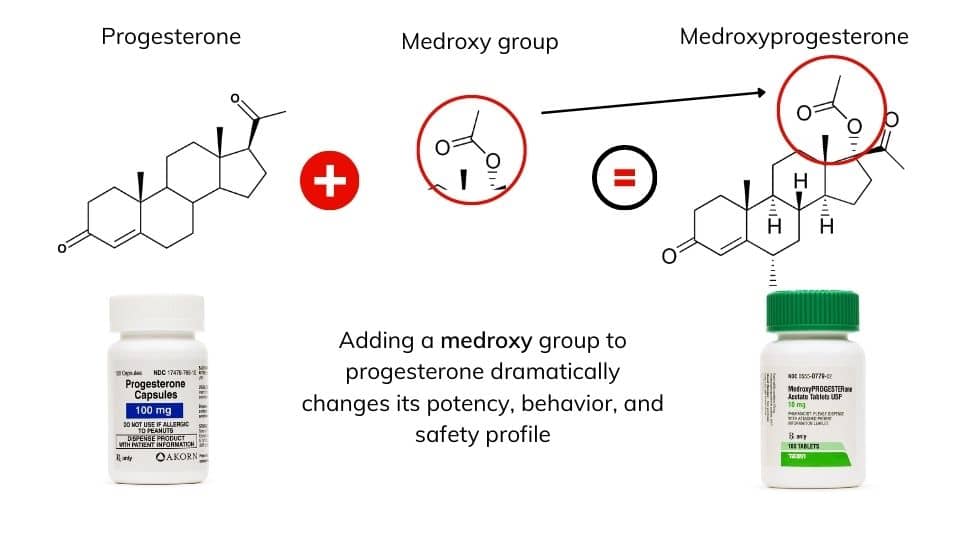 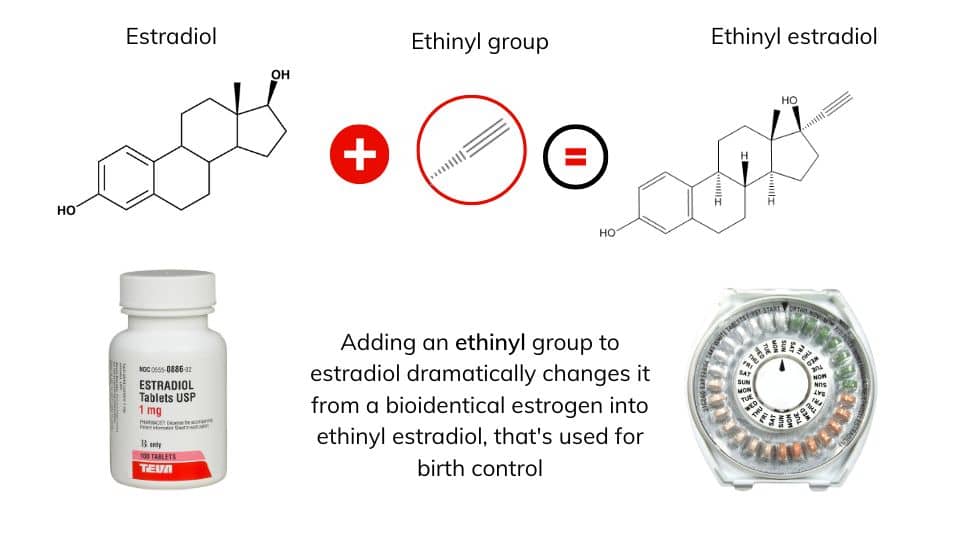 Most Natural Hormones Are Not Bioidentical

People often refer to Premarin® as a synthetic hormone. Because it comes from a natural source, Premarin® meets the criteria for a natural hormone. 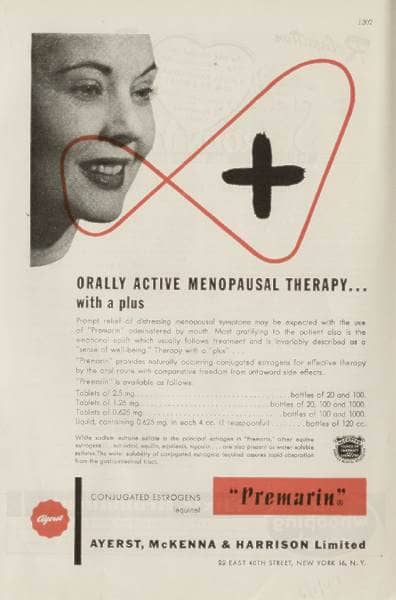 Hormone Providers: Let’s Get Together

I’d love to learn more about your practice and how you help optimize your patients’ hormones. Let’s brainstorm some ways we can save you time, help relieve patients’ fears, and address push back from colleagues who don’t get what you’re doing. Click the button below to schedule a 30-minute Discovery Call. Looking forward to meeting you!

Thyroid products derived from pork include the thyroid hormones levothyroxine (T4) and liothyronine (T3). Drug manufacturers desiccate (dry) pig thyroid glands to create Armour® Thyroid, along with NP® Thyroid, Westhroid®, and others. Machines grind desiccated thyroid glands into a fine powder and mix them with other ingredients to form a solid oral tablet. Companies calibrate 1 grain Armour® Thyroid tablets to contain 38mcg of T4 and 9mcg of T3.

Multiple non-human hormones (and other ingredients) contaminate these naturally-derived hormones, which means they cannot be considered bioidentical. Natural Hormones That May Be Bioidentical?

Pergonal® and Menopur® are both natural hormones. Used for infertility since the early 1960s, they’ve fallen out of favor and aren’t as available as they once were.

When they were available, they contained a mixture of hormones that include FSH (follicle stimulating hormone) and LH (luteinizing hormone), which are derived from the urine of post-menopausal women. Urine was mostly collected from Roman Catholic nuns, with the express permission of the pope. Nuns’ urine is a completely natural source for these drugs. The urine of nuns was specifically used because of the low likelihood any of them would be pregnant, which could drastically change its hormone content.

It’s debatable, but these two hormones might also be considered “bioidentical,” since any contaminants in them would be human hormones or metabolites of human hormones.

I contend that the hormones that are safest, most effective, and most useful are both bioidentical – exactly the same chemical structure as human hormones – and synthetic – derived through a chemical synthesis process.

The synthetic part means that these hormones won’t be contaminated by a bunch of other ingredients that come from animal or human urine or thyroid glands. Synthetic estradiol, for example, is much easier to make into a purified form that is 100% estradiol.

OK, so maybe it’s only 99.6% estradiol and it has a tiny amount of contaminants. But that’s certainly preferable to naturally derived hormones with massive amounts of contamination.

Do you know where bioidentical hormones come from? Many people, including patients and healthcare practitioners, believe that hormones come from yams. Penn State chemistry professor, Russell Marker and his fascinating chemical synthesis story has completely transformed not only the way we obtain hormones but also the cost of those hormones.