Chances are you've heard or read about the WHI. But many healthcare providers haven't read the report, written by the team of researchers who worked on the study. If we take a closer look at the study results and actually read what they say, we may start to see a different picture of what the study says . . . and doesn't say.

Let's dive into "Risks and Benefits of Estrogen Plus Progestin in Healthy Postmenopausal Women Principal Results From the Women's Health Initiative Randomized Controlled Trial."(1) The study report was published by the WHI Writing Group in JAMA in July, 2002.

Let's examine the words the research team used and see if we can figure out exactly what they mean, in context.

The 26% increase (38 vs 30 per 10 000 person-years) observed in the estrogen plus progestin group almost reached nominal statistical significance . . . (emphasis added)

Researchers stopped the WHI in 2002, before it was completed. A perceived increase in breast cancer in the treatment group led to the stopping of the study. In other words, women taking hormone replacement showed a higher risk of breast cancer than women not taking hormones.

Note that the 26% increase cited in this paragraph was an increase in relative risk. Although a 26% increase seems dramatic, the absolute increase in breast cancer cases was much more modest.

A single word in this quote changes the results of the entire study. But this word has been largely forgotten in the chaos that surrounded the trial.

By using the word "almost," the WHI writing group admitted that there was a very small increase in breast cancer risk, which could have been a result of chance, rather than a result of the hormone treatment.

This trial tested only 1 drug regimen, CEE, 0.625 mg/d, plus MPA, 2.5 mg/d, in postmenopausal women with an intact uterus. The results do not necessarily apply to lower dosages of these drugs, to other formulations of oral estrogens and progestins, or to estrogens and progestins administered through the transdermal route. (emphasis added)

The patients recruited for the Women's Health Initiative were give one of three treatments:

Study researchers gave patients a combination of hormones that was the gold standard menopause treatment when the study began. At the time, there were very few alternatives to these two hormones.

The WHI Writing Group explicitly states that the results of their study should NOT be applied to other doses, formulations, or dosage forms of estrogens and progestins. In spite of this statement, the FDA and several physician groups have done exactly the opposite of what the Writing Group recommends.

The FDA has placed a "Black Box Warning" on any and all hormones intended to treat menopause. The warning includes any and all other formulations and dosage forms of estrogens and progestins. It's even applied to hormones that are not the same as those used in the WHI, even though the WHI report doesn't support that conclusion. The warning explicitly cites the results of the Women's Health Initiative as the primary reason prescribers need to be wary of any hormone replacement therapy.

"Principal Results From the Women's Health Initiative" doesn't cover it substantially. But researchers prescribed unopposed estrogen (CEE) to women who had had a hysterectomy. Later analysis of this "estrogen only" treatment group showed that women taking only CEE had a significantly lower rate of breast cancer than women taking CEE + MPA. (2)

The results of the CEE group showed "a statistically significant lower cumulative breast cancer incidence." While this estrogen only component of the study doesn't conclusively prove anything, it does drop some strong hints.

The Women's Health Initiative involved post-menopausal women. These women were, on average, about 63 years old. Women start menopause at an average age of 51.

This means that women in the WHI had gone, on average, a full 12 years past menopause.

Because of this "no symptoms" limitation, the study group decided to enroll older patients, ones who had already gone past the 5-10 years of menopause when symptoms usually persist. But focusing the trial on older women created some unintended consequences.

This later analysis of data from the Women's Health Initiative showed that younger women, closer to the age when menopause starts, did not have an increase in cardiovascular disease. Blocked arteries and heart attacks increase as women age. Hormones did not increase the risk for heart disease when women were separated by age.

Does 12 years without hormones have a negative impact on women's hearts? The data from this study would seem to indicate that it does. 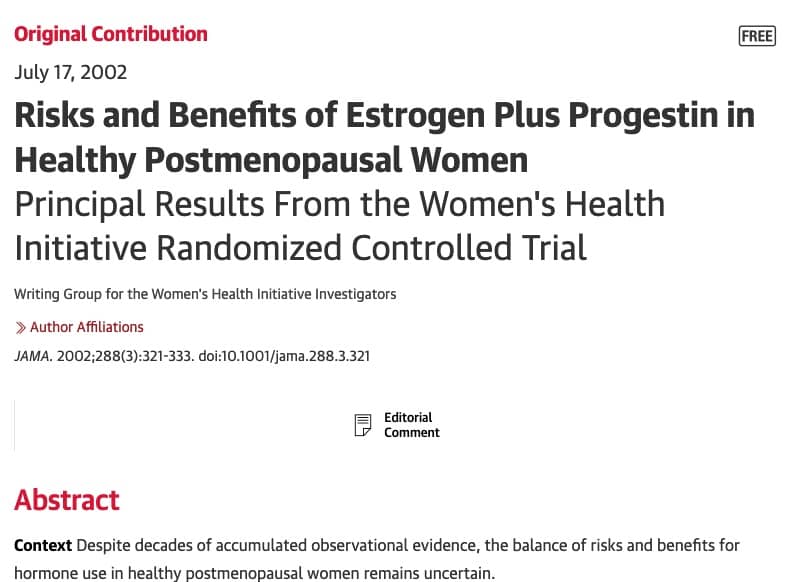 In spite of the use of the word "healthy" in the title, we might question whether the women in the WHI truly were healthy. If we look more closely at how these women were described in the study report, again by the WHI Writing group, we see that:

Read The Women's Health Initiative For Yourself

Don't just to take my word for it. I would encourage you to read the reports on the Women's Health Initiative for yourself. Look closely at the data and the conclusions to determine what it says and what it doesn't say.

If you're a healthcare practitioner and you're interested in more of the evidence around menopause and hormone replacement therapy, I'd love to help. I've compiled a comprehensive list of references so you can take a look at the studies for yourself. Click here to get access to my menopause references.

Are your menopausal patients afraid hormone replacement will give them breast cancer or heart attacks? Maybe their symptoms are making them miserable, but they're still not sure. Maybe they've never even heard of the WHI, but it's influenced their fear anyway. My Simple Hormones patient education programs help you relieve your patients' fears. For a limited time, I'm offering a 60-day free trial subscription. Click the link to learn more.